Thanks to Fern Camacho for having me back on his Great Dog Adventure podcast!

He’s started having real-world case studies, and I was more than happy to brag about how well Leo is doing with my magic string cheese method. When I heard that the Positive Pet Training Blog Hop theme for this month is “Recall,” I thought I’d take this opportunity to add another update. 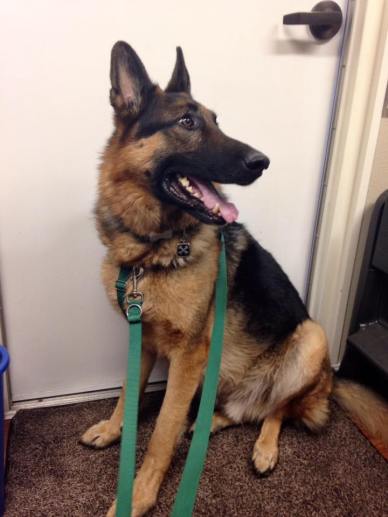 My dogs do not have good recall. They don’t run off for no reason, but we lost Mia to a deer for one scary hour, and Leo has been untrustworthy in a few off-leash situations.

One of the parks we go to has a trail, so I bring string cheese along for the on-leash portion of the excursion. The other day, my god, we encountered a lot of challenges.

First, Mia dropped her ball down a blackberry bramble-covered hill, and we went back to get another one from the car.

Then on the way back down the trail, we passed a woman with a long-haired German shepherd that bared its teeth and snarled at my dogs. My dogs barked back. The woman said, “I guess he’s intimidated.” I was very cheerful back, because believe me, I am empathetic to people with reactive dogs. To quote the guy whom Isis bit, “No one could be more understanding.” I know I should only feel sorry for this woman that she didn’t know better than to bring her dog to the park. But I’ll admit, I was annoyed to see later that she hadn’t left the park, but instead was on her cell phone, throwing a ball down one of the trails, essentially preventing us from walking that way. (Plus we saw her a few days earlier, mindlessly throwing her ball to the dog while on her cell phone.)

In the play area, a Labradoodle stole Leo’s ball a few times, which happens, like, every time we go to the park, but I was distractedly getting the ball back from its owner and missed the appearance of a man on a bicycle. When I saw him, I calmly said, “My dog is going to chase this bicycle,” and leashed up Leo to take him to the other end of the field. However, the man had a dog with him, so he parked his bicycle and stayed a while.

Then, Leo pooped. So I tucked the Chuck-It under one arm, and took out a poop bag, and then it seemed like Leo had run off, so I looked over my shoulder to see another bicycle riding along the path… and Leo running through the field … TO ME. He wasn’t chasing the bike! At the risk of overstating what happened, I think Leo saw the bike and thought to himself, “When I see bikes, I get cheese.” Or else he was on his way to chasing the bike when I redirected him with my offer of cheese. But either way!!

Not that the cyclist would have minded; he was encouraging a dog to chase him, and rode a loop around the whole park.

I of course gave Leo string cheese for coming to me, and then put his leash on. He did lunge once toward the bike as it made its way back toward us, but did not bark, and he put his attention back on me as I continued to cheese him.

I leashed him up two or three more times on this weird park excursion, more than once because I wanted to walk them down the trail that the lady and her long-haired shepherd were monopolizing. When I saw she was still there, I set my dogs free in the field again. I had a few other occasions to call Leo to me in exchange for cheese. And he came back!

So. In addition to accidentally training him with the cheese when I just meant to manage him, I accidentally have improved his recall.

I’m so, so, so proud of my boy. (And sorry that I called him “dopey” in the above podcast.)

This post is part of the Positive Pet Training Blog Hop, hosted by Cascadian Nomads,Tenacious Little Terrier and Rubicon Days. This month’s theme is Recall and the next hop begins on April 4th. The April theme will be training for safety/emergencies for National Pet First Aid Awareness Month. The hop happens on the first Monday of every month, and is open for a full week – please join us in spreading the word about the rewards of positive training!

12 thoughts on “The Accidental Recall”