A few years ago, I decided we were going to cure Leo of his reactivity to bicycles. We planned to walk around the campus of the nearby university where Rob works, with Rob’s bicycle. We started with Rob walking beside the bicycle, and Leo was totally cool with that. Then, another bicycle whizzed past, Leo barked and I crouched to the ground and started to cry.

It all felt so hopeless because there’s no place where I can truly control the environment. We tried a few more times, then switched back into management mode. Since I can’t train Leo not to react to bicycles, I decided, I’m just going to walk him in places where we can more easily avoid bicycles.

However, there’s no place in town we can truly avoid bicycles, so what this really means is that I walk Leo in places where I can see bicycles coming from farther away, and guess what? I’ve been able to do more than manage him.

Fern Camacho of The Great Dog Adventure discusses the difference between management and training in a few of his podcasts. Most recently in this one about leash reactivity. I would add a caveat to his suggestion to stand in front of the dog to break eye contact with the trigger. If you have a redirected biter, like I do, this can lead to a bite on the leg. That’s why I use treats.

Leo has a very short scale of reactivity. He goes from mildly concerned about a stimulus to full-blown reaction very quickly. Rewarding him with food when he’s just past the concerned phase has led to actual progress in counter-conditioning him to the trigger. I carry string cheese in my hand on our walks, and when I can use a stimulus as a teaching moment, I let him see the thing, then say “Cheesy” to get him to look away from it to take a bite of cheese. I let him look, I give him cheese, until we’re past the thing.

As the stimulus (bike, jogger, dog) gets closer, he takes the treat harder and harder, which hurts my fingers, but lets me know how far past his comfort zone we are. That’s training, because he’s gotten more comfortable with triggers at shorter distances. Now, when he sees a scary thing, sometimes he looks to me for the cheese instead of barking and lunging at the thing.

Management is when I try to “distract” him by stuffing the cheese in his face and getting him out of there. It doesn’t always work.

But I’ve gotten so good at it that sometimes what I think will be management turns into a training moment.

The other day, while walking the pups around Rob’s parents’ neighborhood, an old man on a bicycle headed straight for us. “I don’t know what do to,” I said, as I turned and walked in the other direction. Leo looked over his shoulder, but didn’t bark at the guy, and somehow I timed it perfectly to lead Leo into a driveway and behind a shrub that didn’t block his view of the bike, but prevented him from lunging at it as it passed by. I was running low on cheese by this point on the walk, but still I cheesy-cheesed him until the bike was gone.

Unfortunately, my skills are no match for bizarre uncontrollable moments like the following.

While walking the dogs at night, adorned in their flashy Dog-E-Glow collars, Rob carrying a flashlight and me wearing a headlamp, we darted across the street to avoid a jogger. We darted back, and then saw what looked like a single light moving slower than a car. A bicycle. We darted back across the street into a driveway and hid behind some bushes.

The cyclist pulled over at the mailbox directly across the street and turned off his light. What the hell? What’s he doing? “I don’t understand what’s happening,” I said, not caring that the dude could hear me.

Since he wasn’t moving, we tried to continue on our way. Rob asked, “Are you just pausing?” as I stumbled over an uneven patch of grass and fell to one knee.

“I kind of live here,” the guy said, turning on his bright light, shining it in our faces.

Rob said, “Our dog barks at bicycles,” while I said, “Cheesy cheesy,” trying to keep Leo’s focus on me, but come on, how much can we expect a German shepherd to take? He started barking.

Since there was no sidewalk on our side of the street, and the guy said he lived there, and Leo was already barking, we crossed back over on the other side of the guy, and kept walking. Turned out, the guy didn’t live there, but next door to the house in whose driveway we had hidden. So the genius turned around and rode beside us (Leo still barking) back to his driveway, saying, “I saw two people lurking in the bushes, what was I supposed to think?”

Oh, I don’t know, we had two dogs and were wearing various accessories designed to make ourselves visible, what kind of malicious mischief could we possibly be up to? He was supposed to think, Those are two people walking two dogs, minded his own business, and ridden into his own damn driveway.

Okay, yes, I do see how we looked strange, and we do have some weird crime on our block. If Rob saw people hiding in our own driveway, he would have confronted them too, but not in our neighbors’ yards. We expect weird behavior in those driveways.

Lesson learned. The whole thing was very embarrassing, and sadly, makes me reconsider our fairly successful strategy of hiding in people’s bushes.

This post is part of the Positive Pet Training blog hop, hosted by Cascadian Nomads, Tenacious Little Terrier and Rubicon Days. Shout out to Rubicon Days for putting Bark and Lunge in her positive training toolkit. Also for the reminder that positive dog trainers should never feel like dorks for wearing treat pouches (or fanny packs) and doing weird things like chanting “Cheesy cheesy,” every time another person passes by, or you know, hiding in people’s driveways. 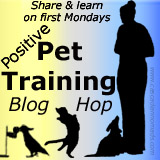 The hop happens on the first Monday of every month, and is open for a full week — please join us in spreading the word about the rewards of positive training!

15 thoughts on “Training versus management for leash-reactive dogs”