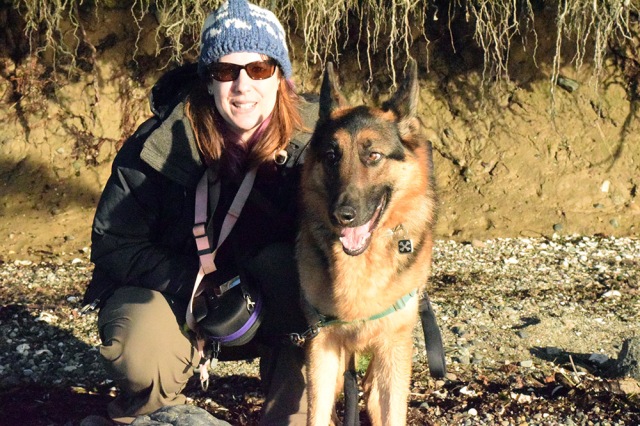 His grin says, “I may have lost my off-leash privileges, but that was so fun I’d do it again.”

I’ve taken the dogs to the above secluded beach a few times where they’ve romped happily off leash. There’s a short cliff leading to a road above, and Leo made my worst fear come true for about two minutes on New Year’s Eve, when he raced up to the road and ran back and forth along it. Here I am releashing him after he ran back: 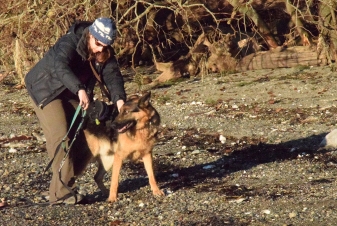 It had been really cold leading up to New Year’s, and I wanted to take them somewhere nice during the day, while I still had time off.

The good thing about bad weather is that it makes walking a leash-reactive dog easier. Fewer people are out and about when it’s cold and dark. Rob and I have been dutifully walking the pooches in the evening hours, sometimes as late as 9 or 10 o’clock.

We do best if I carry the cheese in my hand the whole walk. Several times, a stimulus has approached, and I’ve been too slow to get the cheese from my pocket to Leo’s face.

When I have the cheese at the ready, amazingly, it has prevented reactions. Maybe I’m teaching him something after all! I’d pretty much given up on de-reactivating Leo, thinking there would never be a time that he could withstand a bicycle whizzing by us. But he’s done it!! He takes the cheese really hard, scraping his teeth against my fingers (though he hasn’t drawn blood the way Isis used to). But he doesn’t bark. As long as I have the cheese in my hand.

On our walk last night, I told Rob about the Positive Pet Training Blog Hop and said that I didn’t know what to write about. “I have our success with string cheese, and I have Leo’s little romp on New Year’s Eve, but those two things don’t really make a whole blog post.”

I also had Leo’s little escapade a couple of weeks ago when Leo slipped past Grandma out the front door and raced around the front yard for a few minutes. At the time, and again on New Year’s, Rob asked if I was going to blog about the security breach. “No,” I said. “It’s not really a story. My worst fear, yes, but short-lived.”

THEN… I saw a person on the sidewalk ahead of us. We crossed the street and I prepared to cheese Leo. I noticed the person was actually a pair of people, and they had a dog. Mia crouched to poop. “We don’t have time to stop,” I told Rob (on the other end of Mia’s leash) as I hustled Leo along. The dog across the street saw Leo. Leo saw him. Leo barked. The other dog barked. Mia barked.

Honestly, this was low on the reaction scale. Just dogs saying hello, as far as I’m concerned. Not super-aggressive strings of barks, just a woof back and forth. The other dog owner said, and this has never happened in the history of our conscientiously crossing the street to avoid collisions, “Thank you.”

Rob and I felt just swell about this exchange, although we had left the poop behind, and I have a strict no poop left behind policy.

The area where Mia pooped was grassy, not sidewalk, and shaded by bamboo. On the way back, I asked, “Are you going to cross the street with me to find that poop?” Rob didn’t want to, but I said, “If someone else had failed to pick up their dog poop on that stretch of grass, we would have stepped in it tonight!”

I didn’t need his permission, because when Leo and I started to cross the street, Mia came along with. Rob didn’t have much choice in the matter. Directing my headlamp on the grass, I scanned for poop, hoping Rob wouldn’t step in it before I spotted it.

“Mia, where did you poop?” It seemed like we had walked too far. Had we missed it?

Rob asked, “Do you recognize these cars?”

Yep. I stepped in it. As I bent down to baggie the poop off my shoe, Leo alerted to a man and his dog across the street. I had a bag of poop in my hand, not a piece of string cheese. So he barked at the other dog. A lot.

These things happen. But at least I had something to write about.

Speaking of poop! I almost forgot to shout out where a shout out is due! Notice my accessory in the above photos? Not the pink thing, that’s Mia’s harness. The roundish black thing, sort of turned around so you can’t see the paw print design, is my PoopPac, recommended by Cascadian Nomads, one of the hosts of this blog hop.

Hey, here’s some big news! My book Bark and Lunge is free to Kindle Unlimited subscribers right now! And the Kindle version will be free to everyone Feb. 1-3. Mark your calendars.

Also, why don’t you swing by the BlogPaws Wordless Wednesday Blog Hop:

20 thoughts on “Positive outlook for the new year”