While Rob and I were in Seattle on Saturday, Leo and Mia committed unprecedented destruction.

We were warned by Rob’s dad, Jerry, when I called to tell him we were on our way home. “You’ll never guess what your dogs did.”

“Did they tear up the couch?” (This would not have surprised nor particularly troubled me.)

“No. They chewed up the door between the bathroom and your bedroom, including some drywall.”

Even with that description, we were not prepared for the sight. Jerry tried to show us the dog hair all over his shirt, from where Mia tried to crawl into his lap, as though a hair-covered shirt could compete with this: 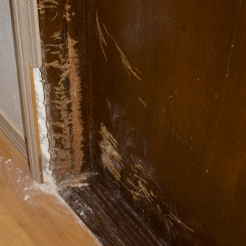 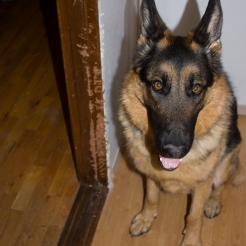 In this case, I think Mia was the instigator of the damage and Leo just followed along. 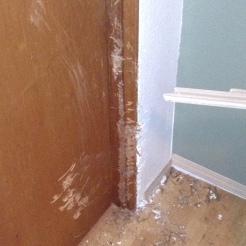 They had gnawed at the door frames of four closed doors, pulling off the trim and chunks of drywall.

I’d been gone since 6 a.m. the day before, but Rob had been gone only a few hours. Had the dogs been so distraught about my 36-hour absence that they’d started eating the house?

This was not the idle chewing of a bored dog. Not like the time Leo ate my parking brake. This destruction was the work of frantic dogs trying desperately to get through the closed doors.

Had they thought they would find me or Rob behind those doors? Had someone been trying to break into the house?

Normally we blame Leo for everything, since Mia can do no wrong. Except that one time when she was in the kitchen while Rob mowed the lawn, and she pawed the trim off the back door. Similar to Saturday’s damage. On a much smaller scale.

Had someone been mowing the lawn next door?

We conducted a little crime scene investigation. Both dogs’ teeth appeared intact. Leo had some drywall smudge on his paw pads and Rob’s mom, Alice, reported that Leo had “chalk on his nose” when she first came in. But that could have been from sniffing the mess. Mia’s claws were slightly worn with white, evidence that she’d scratched the walls.

Mia had crawled onto Jerry’s lap. That’s what she does when she hears beeping.

Neither of us is angry. I’m tormented with guilt knowing they spent hours frantically trying to get through those doors, being driven mad by a beeping keychain.

8 thoughts on “I choose having dogs over having nice things”