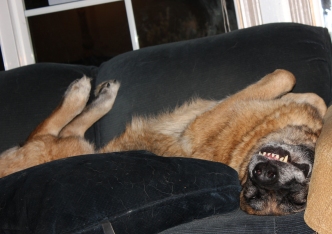 A few weeks ago, I was revising a scene about an intense encounter between Isis and Leo. As I read it aloud to myself, Mia put both front paws on my thighs like she wanted to crawl up onto my lap. In the nearly two years we’ve had her, she has never crawled onto a lap, and by the way, she weighs about 85 pounds.

Naturally, I assumed this meant that I am such an amazing writer that Mia felt the tension in the scene, and either meant to reassure me, or sought my reassurance that everything would be okay.

Later, Mia climbed up onto my lap on the couch while I watched TV.

“What’s with you today, Mia? You’re being very needy.”

Mia started to quiver. Leo stood and looked furtively around the room.

“Rob, you need to change the batteries in your keychain. It’s freaking the dogs out.”

Rob’s keychain had been beeping for hours. Perhaps Mia’s earlier lapdogginess had nothing to do with my writing.

This morning, during a Today Show segment about children sleeping through smoke alarms, Mia put her paws on my lap and quivered when the smoke alarm beeped on the television. Clearly she has a negative association with beeping. What I don’t know is whether something about the frequency merely is irritating/frightening, or if this is a conditioned response to something from her past.

Either way, I muted the TV and snuggled with her until the segment was over.