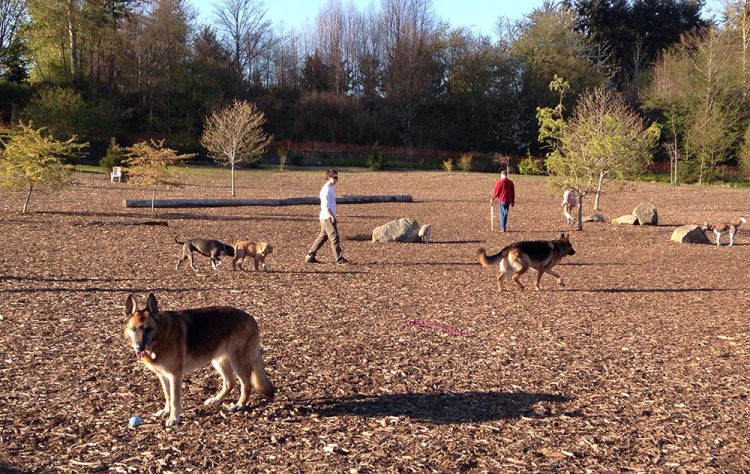 I try not to write too many posts about the wacky and/or horrifying things that happen at the dog park. I know and trust lots of dog professionals who think off-leash parks are terrible places where bad behavior gets reinforced by clueless dog owners making the wrong choices for their dogs.

I agree. But I also have a well-socialized dog who is leash-reactive, so when the weather’s nice, it’s easier to exercise him off-leash in a park with other dogs than it is to walk him anywhere on leash. (Pacific Northwest people and their bicycles! Oy. They’re everywhere.)

And while it’s incredibly trite for me to regale you with anecdotes about the badly behaved dogs and stupid humans we encounter… I’m going to.

I’ve long since given up my dream of politely telling prong collar parents that it’s unsafe for their dog to wear the collar inside the park. (Trust me. I’ve been the idiot dog owner who leaves the prong collar on.) But a couple of times recently, I wished I had a tactful way to tell another dog parent that they’re doing it wrong.

1) Dog A was crouched in a hole of his own digging when Dog B tried to join in. Dog A got snarly. Dog Parent A said, “He hates to share. I wish he wouldn’t do that.” Dog Parent B: “The more you bring him, he’ll figure it out.” Dog Parent A: “Yeah, we need to bring him more.”

2) This one really cleared the park. Our Best Dog Park has a significant design flaw: Only one entrance. Leo and I were chasing a ball at the opposite end, fortunately, when we heard a major Barkapalooza by the gate. Not your healthy, “Hey I’m at the park, yay!” barks, nor your “I have barrier frustration, but once I get in there, I’ll be fine” woofs, but full-blown reactive barking. Rob had a better vantage and saw the man enter with his dog on a long ropey leash. “He was pretty determined to barrel his way in,” Rob reported. This dog snarled and lunged at another dog, and the two had to be separated. The man continued to walk through the park with his dog on leash.

Now then. My guess is that his dog does not have good recall, so he planned to keep it on a longline at the park. My guess is also that he does not understand that his dog likely was barking and lunging because it was on leash. (Unless it always acts that way, in which case, it has no business at the dog park.)

But what can I say to that guy? “Hey, your dog is experiencing barrier frustration. He probably will be better without the leash.” Because I don’t know that. So I just said to Rob, “We should go.” And we went.

One more dog park story, but this one is a cautionary tale to myself.

3) We arrived close to sunset when no one else was there except for a couple sitting on plastic chairs looking at their phones while their dog lay down a ways away. Nothing inherently wrong with this behavior, but I dislike it when people expect their dogs to entertain themselves at the park. Of course the point is for dogs to play with each other, but their people should be alert and involved. Dog parks are not a substitute for spending time with your dog.

After a little bit, the man got up and threw a ball to his dog, which got Leo pretty interested in this dog he had been ignoring and who had been ignoring him. When Leo blocked the dog and prevented it from retrieving the ball so the man had to go get the ball himself, I muttered to Rob, “Whatever, I don’t feel anything for people who just sit around and look at their phones while their dogs do nothing.”

Then I realized the girl with him was young, probably his daughter. And I wondered what circumstances might lead a man and his daughter to spend a Friday night at the dog park with no other dogs, and not play with their dog. I imagined a divorced dad with the daughter for the weekend. Not much to do at his divorced dad pad. When they get back, she’s going to go to her room and not talk to him for the rest of the night. This time at the dog park is the only time they have together.

Turns out, I did feel something for them. I don’t know what their story really is, but it’s none of my business. There’s nothing to be gained by mentally criticizing anyone. You never know what they’re going through.

How about you, friends? How often do you judge your fellow dog parents? Can you hold your tongue when you see a disaster in the making?

4 thoughts on “What happens at the dog park”