You know how no parents think their baby is ugly? Sometimes it’s hard for parents of reactive dogs to see their dogs as scary. 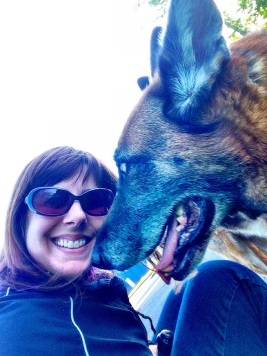 I’m not completely delusional. Leo is a 98-pound dark German shepherd. When he barks and lunges, I know he’s a frightening sight. But I’d like to think, and this is the crazy dog momma in me, that sometimes, if he barks only a few times, maybe other people see him like I do, just a dog being a dog. Maybe they aren’t thinking, “Who is that woman with the vicious dog and why does she let him out of the house?”

We had a great walk Tuesday at the community parking lot. Mia came with, and even though Leo barked a couple of times at a slow-moving jogger, I didn’t think he sounded too ferocious, and the jogger had headphones on and may not have heard him at all. Then, a group of teens — two on foot, one on a bike, and one on a skateboard — crossed the parking lot right in front of us and Leo did NOT bark OR lunge!!! Instead, he watched them with keen, alert interest.

The next day, at the beginning of our walk, I congratulated myself that this place where I started taking Leo to expose him slowly to bicycles, and continued taking him during the winter because it was mostly deserted, has also turned out to be a great place to walk him past numerous distractions now that the weather has turned glorious. I’ve found a great route that takes us past people of all ages and sizes, recreating in all sorts of ways at enough of a distance that Leo either doesn’t react, or if he does react, I’m not completely humiliated, and in the best of all scenarios, sometimes we have a great training moment like Tuesday with the group of teens.

While I was feeling awfully pleased with myself, a man crossed our path with a Husky. I maneuvered Leo away to try to hide behind a car, but he barked a little, and then a jogger passed while the Husky was still in sight and Leo barked a little more. Just a couple of barks. Not particularly low-pitched or menacing ones. (In my admittedly biased opinion.)

The distractions gone, we crossed the street to a kind of berm that runs along an unused baseball diamond. (I’m sure it’s used at some point during the year, but not so far during our walks.) I like this berm because no one else walks on it, and we’re pretty high above the other sidewalk activity, so no one can take us by surprise.

A motorcycle went by below, and my boy gave a mighty bark and a few good lunges. I had the dogs on a bungee-like double leash, so there was some stretch to his lunge, giving me just a hint of a scare that Leo might pull me off my feet and we’d tumble down the berm.

Leo didn’t used to react to motorcycles at all, and he almost never barks at them. His reaction on this walk was the result of trigger stacking. Even though he handled the Husky and the jogger pretty well (and even though he handled the group of partially wheeled teens like a champ the night before), this combination of triggers was too much and too close together in time.

We continued our walk and I tried to remember the word for stacking. I kept thinking piling. Then I thought, A-ha! This is what I will write my WOOF Support blog post about. I better get some pictures.

I walked the dogs toward the skate and bike park, letting them sniff their favorite patches of grass. Not much was going on in the big parking lot, but after I took my attention off my surroundings and started futzing with my mobile device, two bicycles whizzed by. Leo barked. I took a picture.

Fully recognizing my handler error, we meandered back toward the lot where I’d parked. The spring evening was so lovely, I sat down on a curb to take a few more pics of the dogs. Leo and Mia watched families walk to their cars after their hockey lessons or whatever happens weeknights at the Sportsplex. And of course, while I was trying to compose the perfect selfie, two joggers went by. Leo barked. I took a picture. 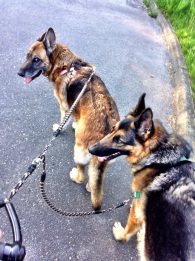 Doggies on the bungee leash 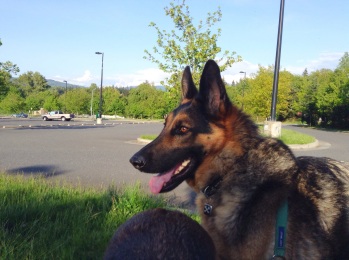 Leo barking at the bicycles he noticed before I did. I tried moving him behind the bushes, but he was already barking and lunging. And since I had the camera out …

And that’s why you never take pictures while walking your reactive dog.

Do you have a reactive or fearful dog? Please join us and share your story. The Blog Hop is open through Sunday, May 11, hosted by Oz the Terrier and Wag ‘n Woof Pets.