The magic of Mia is that I can take her anywhere. Truly. She doesn’t even need a leash; she sticks right by me. Even on a leash, she doesn’t bark and lunge at any of the usual suspects.

My original plan for the Festival of the River was to take Mia with me both days, but then I decided to leave her at home the first day while I set up the booth and got a feel for things. As last year, I watched dogs walk by all day long and looked forward to having my buddy with me the next day.

When Rob and the doggies joined me that evening, we left Leo in the car while we picked up a few items I’d left at my booth. After we set up our tent in the woods, I took Mia on a second trip into the crowd to get a slice of pizza. Both times, she was an exemplary ambassador for the German shepherd breed, accepting oohs and aahs of admirers with a quiet grace and politely greeting other leashed canines large and small. 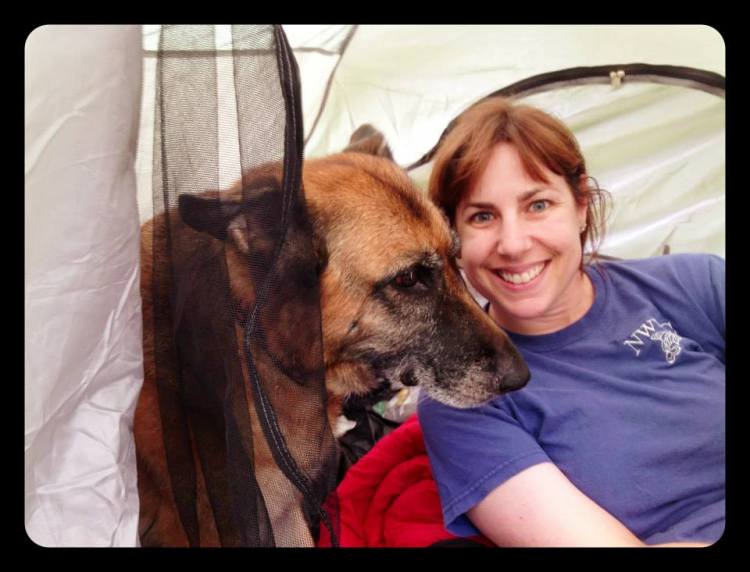 The next morning, as we walked Leo and Rob back to their car, I said, “I’m so proud of Leo. I consider this weekend to be a complete success. Of course, now that I said that, probably Mia will have a complete meltdown. Ha ha ha.”

At the booth, I tethered Mia’s leash to a table as I rearranged my display boards and put out brochures, stickers and temporary tattoos. I set out a bowl of food and water. Early arrivals strolled between the booths, and before I even noticed the white pit bull and its owner, Mia barked at it.

A few minutes later, another pair of dogs sparked the same reaction. A biologist working a booth across from me called out, “Kari, I don’t think your dog likes pit bulls.”

True, one of the pair was a pit bull, but I knew this wasn’t a breed-specific reaction.

What am I going to do now? I can’t leave her in the car. I can’t just leave the festival. I have no cell phone reception, so it’s not like I can easily call Rob to come get her.

I had these thoughts because I have a history of owning reactive dogs. Leo’s barrier frustration makes him bark at passing dogs. If he were off leash and allowed to run up to every dog he saw, he would be perfectly friendly. I think. But because he is a redirected biter, I will not test this hypothesis.

Mia is not reactive. I knew she didn’t mean any harm by her barks, but her intent was irrelevant. I could not have a barking German shepherd at my booth.

Mia was unconcerned about other dogs on leash the night before, so what was the difference? Being tethered to a table?

Maybe I’ll just undo her leash and let her roam around my booth. Mia walked to the edge of the booth, nearly touching a vendor of geode wind chimes, and peered behind my vinyl curtain. The geode vendor gave me the stink-eye, so I leashed her back up.

I kicked myself for leaving Mia’s rubber Chuck-It ball in the car that Rob drove home. I tossed her an apple-shaped stress ball in hopes that she’d occupy herself with tearing it up for the next twenty minutes. She sniffed and ignored it.

Think, Kari, think. You know how to solve this problem.

Positive reinforcement. I filled a poop bag with treats and stuck it in my pocket. The next time I saw a dog approach, I gave Mia treats. My initial strategy was to get her to associate treats with the passing dogs, but Mia is so food-motivated that she was distracted enough to seem not even to notice the other dog.

An airedale, the same one we saw tethered to an RV earlier that day, lingered with its owner at a neighboring booth. Mia noticed her and barked a few times. I redirected her gaze in the other direction and wondered, Am I going to have to do this all day?

As it turned out, no, I didn’t have to do it all day. Either the positive reinforcement worked, or Mia just got used to the idea that other dogs were going to walk by. (Or both.) I gave her treats every time I saw another dog coming, but I also worked my booth, meaning I put temporary tattoo application and fish consumption rate explaining above Mia management. One guy entered my booth as I was treating Mia and I thought she might bark at the approaching dog as soon as I took my attention away from her, but she didn’t make a sound, and when I finished with the other guy, the dog was long gone.

While Mia may have driven off a dog-fearing festival-goer or two, she was a major attraction for many, many more people. Far more people asked, “Can I pet your dog?” than asked me to explain the importance of raising the state’s fish consumption rate, although you can bet I used Mia as an opening. 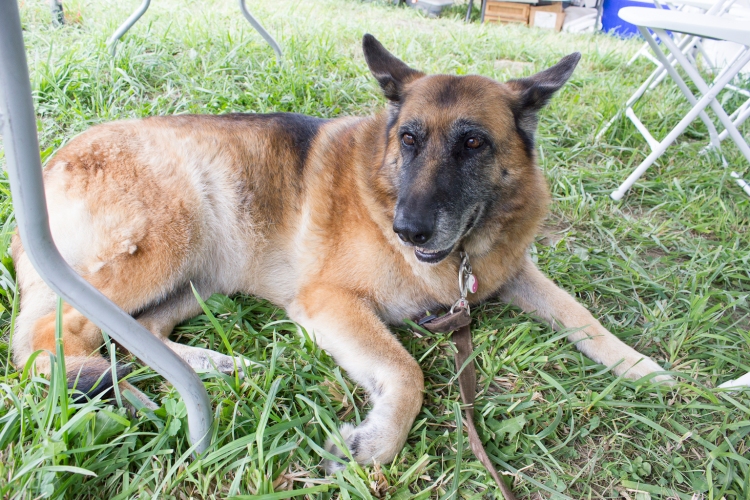 Here, Mia proved to be the bomb-proof dog I know her to be. At one point, I was concerned briefly she might frighten a toddler mid-pet by barking at a passing dog, but she did not. Perhaps strokes from a toddler are as positively reinforcing (and/or distracting) as a handful of treats. Other children cuddled her, rolled on top of her, and even put their sunglasses on her. (I wish I’d gotten a photo of that one.)

Mia and I both relaxed and I was so happy to have her with me. Her presence brightened my day. Gave me someone to talk to during the slow stretches in the afternoon.

As much joy as she brought me, and as much as I know she loves being by my side, it occurred to me that Mia might not actually be having the best time ever.

I had a similar feeling the night before, blissfully snuggled with Rob and the doggies in our tent. Rob had gotten stuck in horrible traffic on the way into the festival, and nettles scraped his legs as we set up camp.

“Are you having fun?” I asked.

“I’m just trying to get through it,” he said, perfectly amiably. I love that about Rob. The outing didn’t meet his expectations, but he didn’t punish me for it. Like Mia, he was there for me, making sure that I had a better time than I would have alone, but not getting all that much out of it himself.

That’s what our dogs do for us. If you asked Mia, she’d tell you she’d rather go with me anywhere than get left at home. But as the responsible adult, I recognize that bringing Mia to the festival was more fun for me than it was for her.

She was bored, lying on the grass beside me for hours on end, with the occasional break to walk to the port-a-potties. Worse, the constant assaults from strangers took a toll. Late in the day, a man asked if he could pet her and Mia barely raised her head to him before letting out an exhausted sigh. Sure, whatever, I’m here for your amusement. 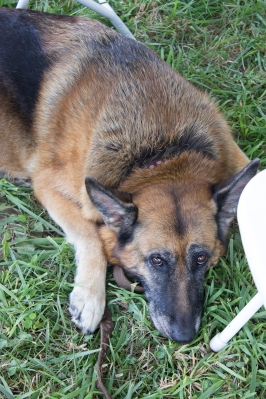 My last post illuminated what I learned last weekend about managing my barrier-frustrated dog, Leo. I also learned a lesson about my perfect, normal, senior dog, Mia. Next year, I won’t force her to work the festival with me. (And Rob doesn’t have to drive down to camp out with me. Unless he changes his mind.)

This post is part of a Senior Pet Awareness blog hop, brought to you by BlogPaws.