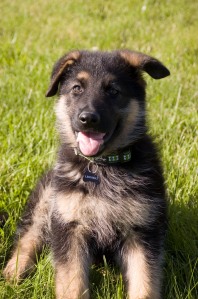 What did I think? Isis would take one sniff of Leo and they’d play like litter mates?

OK, that’s exactly what I thought.

This is going to be much harder than I expected. And I didn’t really expect it to be easy, did I?

Well, not exactly, but I thought I had all these methods of integrating my new puppy into the household with a reactive dog, and that these methods would be tough to implement, but they would work.

What was my plan B, if upon meeting Leo, Isis pinned him down and snarled at him?

Because, yeah, that’s what happened. And there was no plan B.

We took them to a neutral location and I tried to recreate the scenario where she was calm, interested and friendly to another pup. Unfortunately, that pup was a dud, and Leo was more lively. Or Isis was more stressed because she hadn’t seen me all day. Or I wasn’t paying close enough attention to her body language. Or something else.

I didn’t think I could just bring a new puppy home and keep him separate from her until they were ready to meet. But that’s been the outcome of their unfortunate first meeting.

We baby Isis so much. My primary concern was how my precious little girl would handle the change. I wasn’t prepared for how protective I’d feel of Leo, who really is just a baby. How terrifying for him to be faced with a dog who looks just like his mommy and daddy, and have her attack him. She’s not the baby anymore. She’s the big sister and she cannot act like this.

I don’t even like to say “attack,” because she didn’t “go after him.” They ran up and sniffed each other. She reared her head back, which she does when she’s uncomfortable, and then Leo was on his back and she was a big snarling mess. We separated them really quickly, and he was not hurt. But his cries were heartbreaking.

At 10 weeks, he is in a “fear period,” meaning, Experiences a puppy perceives as traumatic during this time are generalized and may affect him all his life.

This was pretty much the worst case scenario. It’s what Isis started doing to min pins and other small dogs at the dog park, before I stopped taking her to the dog park. But she has played successfully with a Lab puppy, and because her meeting with another German shepherd went well a few weeks ago, I hoped for the best with baby brother Leo.

I had no idea what to do. We brought them home and let Isis play outside while Leo explored inside. 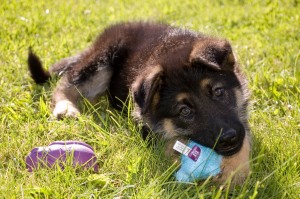 Here’s where Rob and I displayed sides of our True Characters. I am a quitter. I thought to myself, “This is too hard. It was a mistake. We should take Leo back.”

I asked Rob if we should do that and he said, “What???! No!” And he hadn’t even spent the whole day bonding with Leo on the car ride, like I had. It’s too late. Leo is part of our family.

So far, the gradual approach is working. Leo is gated in the laundry room and Isis is not troubled by his presence or his occasional whimpering. She definitely knows there’s a dog in the house. Leo is, naturally, afraid of Isis.

Last night after we got home, I tried some “protected contact,” where they saw each other through the chainlink dog run fence. Too soon. Isis barked and Leo cowered.

But today, it’s been better. Rob played with Isis and her soccer ball on the hill while Leo peed. He showed an interest in what Isis was doing and got braver, moving closer and closer to the fence. She definitely knew he was there, but continued playing.

Later, I had Isis doing her agility course, while Leo was in the dog run. A few times, she noticed him and ran toward the gate. The first time I panicked, and so did Leo — he ran back to the house. But Isis didn’t bark at him and in fact, came right back to me when I called her, and was able to do the agility course a few more times. Leo again moved toward the fence, then backed away when Isis came closer. I thought this was progress. She’s not acting hostile, just curious. And even though he’s afraid of her…he’s learning that she’s not going to bark at him, and getting braver by moving closer to her, also curious about her.

At some point, they’re going to show me through their body language that they’re ready for face-to-face contact. Until then, well, we weren’t planning on leaving them alone in the house together anyway, and it’s been recommended that you keep a puppy “confined” to one room until he is housebroken. Puppies cry and keep you up at night anyway. This is just a little added stress, right?

The good news is, I already planned to take time off from work. What I’m doing for my summer vacation is managing my dogs.

One thought on “This parenting thing is hard”