I’ve decided to do Nanowrimo again.  Apparently this is an odd-year thing, like pink salmon runs. I did it in 2005 and 2007, writing a 50,000 word novel in the month of November. I had pretty good ideas both years, and yet, each time struggled just a little to make my word count. The first year, I took excerpts from news stories I’d written. It’s not cheating if I wrote it, right? I mean, I wrote more than 50,000 words that month, it’s just that most of it was for my job. It’s not cheating if the stories actually fit into the plot of the novel, right?

The trouble with the novels of 2005 and 2007, along with my first novel, the only one that’s “complete,” is that they’re far too derivative from my actual life and I get scared about having anyone read them. Defeats the purpose a little.

I’m determined to get my writing juices moving again. So do I write something that is again so personal I don’t want anyone to read it, just to get the words flowing, or do I really make an effort to write fiction this time?

Because so far, what I’m thinking is a story about a woman building an enormous shop in her backyard. 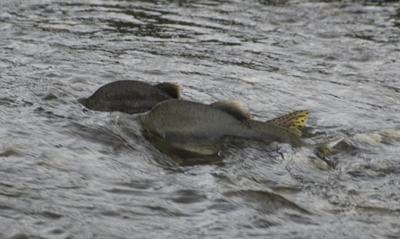 Speaking of pink salmon, I watched some spawn yesterday in a creek that is the focal point of a restoration project. While taking pictures of the site, I glanced at the stream to see if there were fish, assuming there wouldn’t be because someone would have mentioned it if there were. I heard a splash or two and didn’t see them at first, but sure enough, the creek was loaded with pinks. Steelhead too, I think. It’s tough to get good pics of spawning fish and I trudged through the sludge back to the car to get my polarized filter. I shot about 100 photos of fish. (and slightly fewer than that of the construction work I was supposed to be shooting.)

It was wonderful. No rush to be anywhere. I had a chance to enjoy the view without self-consciousness. I love this part of my job: “reporting,” getting out there and observing something, seeing something that I wouldn’t have otherwise. Appreciating something. Documenting it. Attempting to create art out of it. And I did wind up with a few photos I like.

I hadn’t seen pinks spawn before. Chinook and coho yes. I liked that I was able to identify them definitively by the humps on their back. I watched them nuzzle up against each other and whiz around and I tried desperately to get a shot of one with its head out of the water. 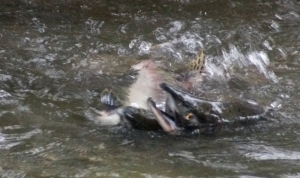 I succeeded but didn’t know it until I got back to the office to view the files.

I could have stayed all day if I’d had more photo cards on me and if I hadn’t gotten really hungry for lunch.