John Pilley uses old-school psychology to train his border collie in Chaser: Unlocking the Genius of the Dog Who Knows a Thousand Words, co-authored with Hilary Hinzmann. What a coincidence that the methods he uses, based on his experience as a professor of human psychology, look a lot like force-free dog training!

With one exception: Like Ted Kerasote in Merle’s Door, Pilley turns to an aversive method to curb Chaser’s “chase drive.” While Kerasote used a shock collar, Pilley uses a mighty jerk of a long line and a stern “No.” It’s hard for me to say these techniques are wrong, wrong, wrong, because as far as reported, they prevented the dogs from chasing things, and neither Merle nor Chaser developed aggressive or fearful tendencies as a result. I can say that knowing what I now know, I would never use either method on a dog.

Otherwise, the book is a joy to read. I love that this retired professor refers to himself as Chaser’s “Pop Pop” (because that’s what his grandson calls him). Throughout, Pilley emphasizes how much fun it is for Chaser to learn new words. He turns down an offer to let another scientist work with her, which would have meant more academic acclaim, because that would mean having Chaser live with someone else temporarily. Above all, Chaser is a family dog.

I’ve heard dog trainers brag about how many words their dogs know. How do they really know? I wondered. Beyond their names and basic obedience commands, most dogs know “outside” or “walk” or “dinner,” but how do you keep track of the number of words? Pilley set about it scientifically, by giving each toy a unique name. He has a list of 1,022 different toy names that Chaser understands. He also teaches her categories of words: she knows a racquetball by its name “Blue,” and also knows that it is a “toy” and a “ball.”

Like Wallace: The Underdog Who Conquered a Sport, Saved a Marriage, and Championed Pit Bulls — One Flying Disc at a Time, Chaser is a book about a dog of extraordinary achievement. While both dogs are special, neither would have been a superstar without the devotion of the “handler” (owner…trainer…Pop Pop, whatever you want to call them).

Pilley works with Chaser for hours a day. With that much dedication, I bet any dog of above average intelligence could learn quite a few words.

As I said in my post about Wallace, I wish I’d known about flying disc, or at least been able to turn catching soccer balls into a “job” for Isis. Reading about Chaser makes me wish Leo and Mia had that much enthusiasm about anything. Leo especially. Mia is content to sit in the backyard with her Jolly Ball and bark at us. But Leo’s still young. He needs stimulation. We took him to a nose work class, and he liked it all right, I guess, but not enough for me to keep at it. It seemed like a lot of money and effort to drive to a class where each dog only gets instruction for a few minutes at a time.

I wish Leo were as passionate about play as Isis was. I’m as devoted to my dogs as Wallace’s and Chaser’s people. I would gladly spend hours a day working on something Leo loved as much as Isis loved soccer. Sometimes in the evenings, especially during the winter when it’s cold and dark, I look at restless Leo mouthing the sofa cushion and think, “What? What is it that we can do that would keep us entertained for hours? What would hold your interest, Leo? Tell me!”

Any thoughts, friends? Remember, Leo is leash-reactive, so long walks are challenging, but I think that’s what he enjoys most: excursions. It’s kind of nice on really cold evenings. I take him somewhere well-lit, where no one else is out who will incite his barking and lunging.

Aside from that, he loses interest in fetch fairly quickly. We have agility equipment, but like everything else, he goes over the A-frame once, maybe twice and is done with it. Same with Rally-O. The kid only wants to practice his sits so many times. Then I get a blank stare. Honestly, I don’t think he’s as bright as Chaser, otherwise, I’d start acquiring hundreds of toys. 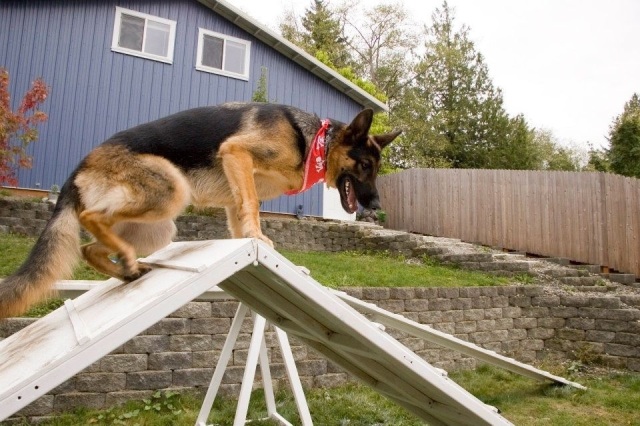 7 thoughts on “Exercising a Dog’s Mind”