One of the assignments in my memoir class was to write a eulogy for someone in our story. The person didn’t have to be dead, but my main character happens to be, so it made sense to eulogize Isis. A classmate said he found my Eulogy for Isis very touching and he hoped I would use it somehow in my book. Originally, I thought my book would start with the day Isis died, but after my classmate’s comment, I decided the actual eulogy would make a nice prologue. And since the whole book really is a tribute to her life, Eulogy for Isis seemed a fitting title.

My mother thinks either choice would be too much of a spoiler, but as I’ve said, I want my readers to be prepared for the inevitable. Which is why I’d open the book with a eulogy. But she has a point. Eulogy is kind of downer. My mom thinks I should call it something that invokes the sweetness and joy of Isis’ life.

That would be a good title. That was our favorite nickname for her. Except then people would think it’s about a bird. My mom said, “Well, there would be a dog on the cover.”

True. I imagine this being the cover shot: 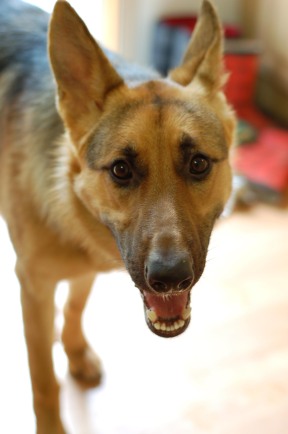 See how she looks like a bird? And she’s smiling?

I had wanted her name to be in the title, but I didn’t want it to be possessive, because Isis’ leads to all sorts of apostrophic confusion and pronunciation challenges.

Fortunately, I don’t have to decide right now. I have to finish the book first.