Mindy Kaling is one of my comedy heroines. Right up there with Tina Fey, Amy Poehler and Julia Louis-Dreyfus.

I always thought she was funny in her tertiary role on The Office, and was impressed when I noticed that she had a writer, producer and sometimes directing credit. I “liked” Subtle Sexuality on Facebook after watching the video for Male Prima Donna.

Following her on Twitter is what solidified our completely one-sided friendship.

When her book, Is Everyone Hanging Out Without Me? (And Other Concerns) came out a few weeks ago, I asked Rob to get it in audio form, because it’s so awesome to hear comedy writers read their own stuff. In the book, she talks about how falling asleep watching Dave Chappelle made her feel like they were friends. Well, that’s what it’s been like the past few weeks; Kelly Kapoor tells us funny stories every night before bed.

The best part is that Rob thinks she’s hilarious too!

His review: Once you factor in her creative talents in authoring & narrating humorous tales, Mindy’s hotness skyrockets through the roof. Gorgeous and brilliantly witty. She is the second smartest & hottest & funniest girl next to Kari.

So when I found out she was going to be signing her book in Seattle, even though I’d already listened to most of it, and even though I can’t remember the last time I paid cover price for a book (sorry, authors), and even though the UW Bookstore required you to buy the book there to have it signed, we happily drove down there and paid $25 for the book and the privilege of saying “You’re my favorite Twitter friend.” 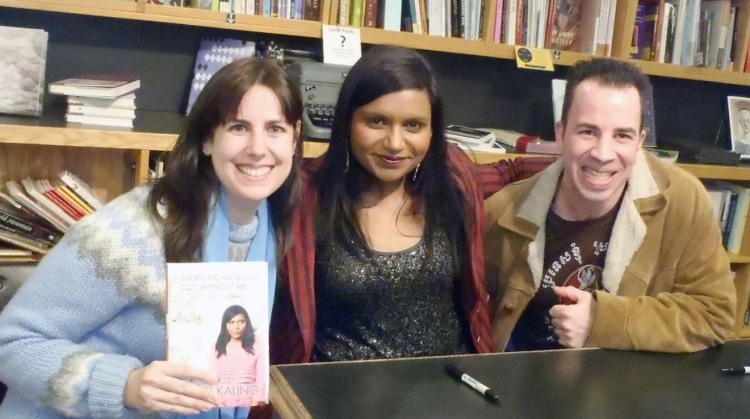 Know what else is cool? And I can say this with some authority since I grew up in Los Angeles and have seen my fair share of celebrities close up. Mindy Kaling is considered more of a “real person” than a “model/actress” type (which she notes in the chapter where she describes having to audition for, and be turned down for, the character of “Mindy” in a pilot she wrote!). And yet, compared to all of us schlubby Pacific Northwesterners, she looked famous. Glamorous and put together. And was so gracious.

One thought on “I paid full price for @mindykaling’s book”