Lately, when we bring the dogs to Rob’s parents’ house, they behave very well and wind up calmly lying down: Mia on a throw rug while Leo helps himself to the couch. In the past, Leo’s countersurfing has been a problem, but since he seems to have matured a bit, I was eager to bring them both to Thanksgiving dinner.

Our gathering was small: me and Rob, Rob’s parents, Rob’s uncle and aunt, and a delightful six-year-old girl Leo has known since he was a puppy.

Here he is, getting ready to pull her wheelchair like it’s a sleigh. 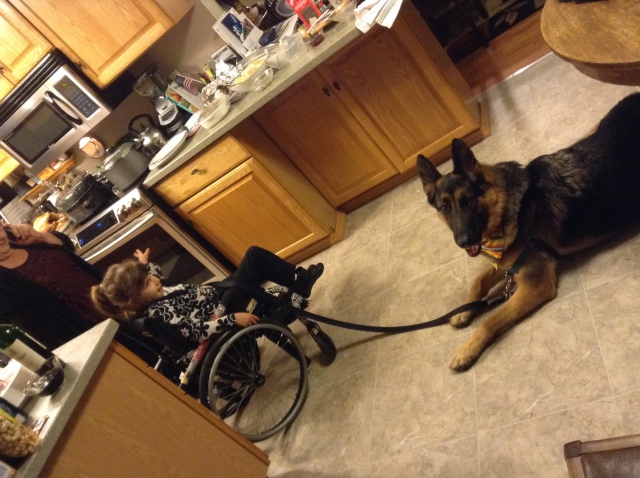 And here he is pulling her as Mia cheers on. 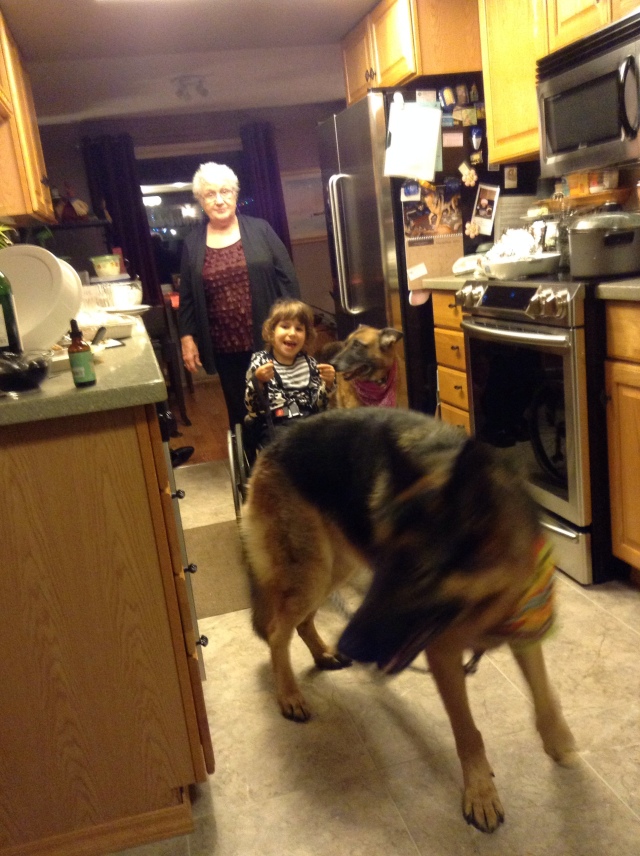 I know, normal people post pictures of their meal.

I didn’t realize that Rob’s aunt had never met the dogs. I felt a cold stab of guilt when Leo and I opened the door for her and she recoiled, saying “I’m quite terrified of large dogs.” A year ago, I might have panicked and stuck Leo in the car and made him wait out the rest of the celebration there, but I had faith in my boy, who has no history of snarling at anyone while off leash. I murmured to Rob to make sure Leo didn’t pester her at all, and Auntie clarified that she was terrified of dogs she didn’t know. Rob asked if it would help if she petted Leo, and she said it would.

Leo did a fair bit of polite wandering prior to dinner being served. Nothing inappropriate, but to someone afraid of dogs, I know Leo’s size is intimidating.

During dinner, Mia lay down underneath the table, a little closer to Auntie’s feet than I would have liked, but I’m not sure Auntie even noticed. Leo lay down on a mat behind Auntie at first. Then he did a cursory counter check while the kitchen was unattended. When he returned, he lay down on the other side of the table.

A perk of Rob’s and my never actually eating meals at our kitchen table is that our dogs don’t beg. At all! So kudos to us!

After we finished eating and the older men returned to the football cave, however, Leo stood and wrapped his teeth around the drumstick end of the turkey carcass still sitting on the dining table.

“Ha, ha, anyone want turkey leftovers?” I could afford to joke, because I don’t eat turkey.

No one was overly troubled by this transgression. After all, the turkey was at the exact height of Leo’s nose when he stood. What’s a dog to do?

Then, just as Rob’s mom congratulated herself for getting the rest of the food put away quickly in Leo’s presence, my boy propped his paws on the counter and licked a stick of butter in a dish.

“Just throw it out,” said Rob’s dad. (Leo is a repeat butter-stealing offender. Once he ate the whole stick before we caught him.)

“He only licked the top stick of butter,” I defended.

After that, I put Leo’s leash on, to keep him away from the counters and to play reindeer games. But then his leash got caught on one of the wheels of the wheelchair, so I detached him and was distracted long enough for him to snatch a wing from the turkey (now on top of the stove) and race around the house with it.

“Just let him have it,” said Rob’s dad. Yeah, that’s how permissive my dogs’ grandparents are.

“The bones are cooked; they could splinter,” I said.

I retrieved the wing bones from his mouth and gave half of his booty to Mia.

When I got home, I laughed at this post about countersurfing on Victoria Stilwell’s Positively blog. That might have been useful to read before dinner. But I already knew, the failure in management was ours. You can’t get mad at a dog for doing what comes naturally. (Honestly, I can’t get mad at Leo for anything. He’s just Leo.)

At the end of the day, I was thankful that Leo waited until after we’d eaten to showcase his naughty side. And I was beyond thrilled when Rob’s mom reported that Auntie was very impressed with how well-behaved our dogs were. Even after witnessing Leo’s antics!

I know I’m a little late to the Monday Mischief party, and Thanksgiving seems like it was ages ago already, but maybe some of you are still catching up too.

Anyone else have a countersurfer attend Thanksgiving? 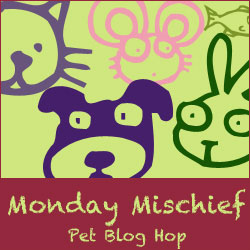