Last Tuesday, Rob’s mom called me and said, “There’s a four-and-a-half-year-old female German shepherd whose owners moved away and abandoned it.”

Naturally, because Isis was four-and-a-half when she died, she thought we’d want this one. I was stunned, because while I did want to rescue another shepherd someday, I thought Rob’s parents would be the least receptive to the idea, considering it would be more work for them. They’re damn dutiful dog grandparents, not only staying at our house when we’re out of town, but also coming over every day if we ask them, to let the dog(s) out while we’re at work. The situation with Isis and Leo was so stressful, I thought Rob’s parents would say “Noooooooo,” if I told them we were getting another dog.

So this was an unexpected turn. When Rob got home from work, I opened with that same line his mom gave me. He said, “I don’t want to hear about it,” which actually, may have been because he thought I was telling him about a sad tale, rather than a potentially happy opportunity. Or maybe it was just that his first reaction, like mine, was, “Oh, it’s too soon. Leo’s still so much trouble. SO much trouble.” But I’d already told the woman who had the abandoned dog she should text me a photo. Thinking of Isis, I’d decided the first condition was that she be really, really beautiful.

I couldn’t tell much about her face from this picture, but the text that accompanied it said, “This is Mia. She is sweet, but sad. Needs a good home.” I showed it to Rob. He said he’d go with me to meet her. Which was HUGE, because long ago, when I first started pining for a puppy, he wouldn’t even go with me “just to look” at dogs. Then he said he was looking forward to meeting her.

Then we both started getting our hopes up.

We took Leo with us to meet her Saturday. We planned what we would say, how we would know whether the other had decided definitely no. We said we weren’t necessarily bringing her home that day, but it was a possibility.

The people who were fostering her lived on a reservation. I knew there was a strong possibility there would be loose dogs around, which would agitate Leo, but not to the extent it would have agitated Isis. I was right. As soon as we pulled in the driveway, a German shepherd who looked a lot older than four-and-a-half ran up to the car along with several other dogs of all sizes. Leo went berserker. We got out of the car and moved closer to the house to get the dogs out of Leo’s field of vision. A small pitbull mix lifted his leg and peed on my front tire.

My first thought at seeing Mia was, “Oh, she’s too old. Rob’s not going to want her, because Isis was so puppy-like. He wants a dog who will be more like Isis.” The cell phone photo had been framed conveniently to not show how gray Mia’s muzzle is. We introduced ourselves and spent a few minutes watching Mia interact with the other dogs. I asked her foster mom some questions, but I didn’t learn much. Her neighbors got Mia from some people in Mount Vernon. Then they couldn’t take care of her. Leo was barking the whole time.

We decided to see what Leo thought of her so I went to the car to get him. Despite the fact that he did not for one second stop barking the entire time we had been there, and it had been at most 10 minutes, he’d managed to get a hold of the squishy head pillow I’d attached to my headrest. Little white beads were all over the back of my car. “Oh, Leo,” I thought. “You little rascal.” Then I realized that he’d not only torn apart the little pillow, but had taken a huge chunk out of the seat itself! He was so revved up by the other dogs running around outside that he took it out on my car seat! And this is a dog who is not remotely reactive or dog aggressive. Evidently, he was really freaked out.

Rattled, but undeterred, I took Leo over to Mia, and they introduced themselves to each other in what I believe to be the customary way among German shepherds. Some sniffing, a bark or two. They didn’t immediately start romping together, but you could tell they weren’t going to be mortal enemies.

Something about her. She was older than we expected. Gray around the muzzle. Leo didn’t immediately say, “Hey, wanna be my new best friend?” But she wagged her tail when we spoke to her. And she ran around with a soccer ball in her mouth.

Her foster mom clearly did not want to keep her. If we took her home and it wasn’t a perfect fit, neither one of us would be willing to take her back.

With the windows down on the drive home, we felt like we were inside a snow globe. Those little white beads flew all over the place, getting in our dogs’ eyes, in my Diet Pepsi. Everywhere. (Later I went through two cycles at the car wash vacuum and still didn’t get them all.) At least it distracted me from the more permanent damage to the car seat.

In the two days since, Leo and Mia have been getting to know each other. She does resource-guard food and toys from him, and will lift her upper lip and snarl if she thinks he’s going to take them. But she’ll let me take a toy from her, and walk close to her while she’s eating, and that’s more important anyway. He pestered her a lot that first day, walking up to her and trying to engage her by barking in her face. She’d tell him a harsh word or two, and they seem to be working things out and are doing that less now.

The first night, they fell asleep on our bedroom floor, nose to nose. It made me so happy I could cry.

Mia hasn’t done anything naughty like chew on anything she’s not supposed to. She’s housebroken and even seems to be trained not to get on the furniture, which of course is a habit we hope to break. This morning she jumped on the bed for the first time and rolled on her back happily to let us snuggle with her. We were thrilled.

Leo, who is not Mr. Affectionate, gets jealous when we talk to her and pet her, so I take those opportunities to smother him with kisses, which he allows. Leo’s also been pestering us less. Now he bites Mia’s ankles when he wants to play, not Rob’s.

I took her to the vet today and learned that she is microchipped, but the chip is not registered, which, to me, means she’s ours for good. The vet also thinks she’s closer to seven years old, but that she has the teeth of a younger dog. (German shepherds are like that, because they have normal-shaped mouths, she said.) Everything about her looked healthy…except…she has some kind of mass around the bone of her hind leg.

While she was being X-rayed to see if it was a broken bone healed wrong (it was not) and aspirated to see if it’s a tumor, I thought, “Oh, shit. 2011, you bastard. You’re going to take away another dog and break my heart again.” I’m not going to spend thousands of dollars on MRIs and aggressive treatment for this dog, although we love her already. The best we can do is pay for whatever medical care to make her comfortable and give her a loving home.

The vet came back and said when she aspirated it, only fat tissue came out, so she thinks it’s a lipoma. It’s not causing Mia any noticeable discomfort, but could if it gets bigger. I can deal with that. We’ll keep an eye on it and treat it later if it starts to hurt.

Since we didn’t have to pay an adoption fee, I was perfectly happy to pay the $200 vet bill that included the X-ray and aspiration.

When we pulled back into the driveway, I said, “Welcome home, Mia. You’re going to live here for the rest of your life.” 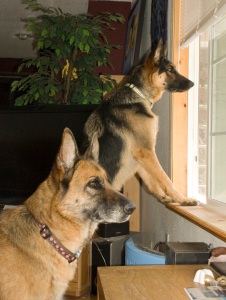 5 thoughts on “From zero to Mia in five days”