I used to hate spiders as much as the next guy, but after last summer’s cocoon rampage, I just can’t muster up any real arachnophobia. As summer cooled to fall, lots of my Facebook friends cringed virtually about the number of webs and ginormous octopeds around their homes. Not only did I not mind the spiders barring our front door, nor freak out when I walked through an invisible, stringy web (Not like Rob, who actually cried out, “Ahh! Is it on me? Is it on me? Please, just check!”), I have let a spider dangle above the couch for, like, weeks. He’s not bothering me, why should I bother him? 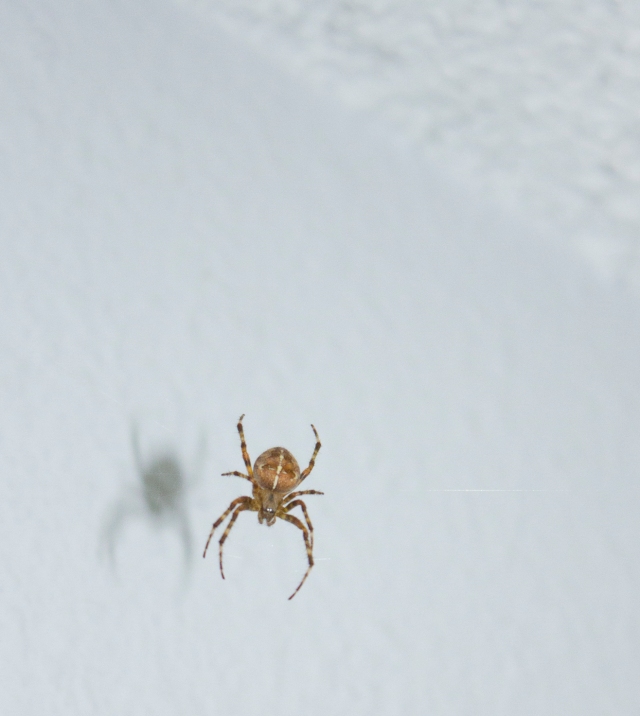 I used to have an “It’s them or me” policy about bugs, which came back to me the other day when I noticed something dark in the corner of the shower. What is that, a spider? I thought idly, then looked directly at it, and then, yes, I screamed a little.

“Sorry, dude.” I tried to sever the web from which she dangled, to lower her into the shower spray, but she just hung from my finger. I redirected the showerhead to spray her directly, but she just worked her way back up to the ceiling. I watched as she wriggled her front legs while she walked across the ceiling. What’s she doing? Is she trying to dry off, or is that how they spin webs? I watched fascinated as she worked her way toward the vent at the center of my shower ceiling, my mouth agape. Oh, god, what if she falls directly into my mouth? I pinned myself against the wall, hoping she’d work her way all the way out of the shower, but she just taunted me overhead.

I remembered a water glass I’d left in the bathroom windowsill (Remember the little girl in Signs, with her abandoned water glasses? That’s totally me). Stepping out of the shower, I dumped the days old water in the sink and pressed the glass around the spider. She fell into the bottom of the glass, which I then tipped upside down in the sink while I finished my shower, feeling a little guilty because what if she suffocated or drowned in a drop of water still remaining in the glass? Would serve her right for attacking me in the shower, I justified.

She lived to tell the tale and met the fate of nearly all the spiders I’ve had to remove from the premises. I let her out the back door.

That other guy, though, he’s still hanging over the couch. Maybe he’s dead. How long do spiders live, anyway?