Today was a relaxing day, by comparison. The plan was to take the hydrofoil to Peterhof to see Peter the Great’s palace. But when we arrived at the pier with the big Meteorboat to Peterhof sign (in Cyrillic), it was deserted and the guy at the coffeeshop said there were no boats.

“Because of the weather?” I pointed at the sky as if that would make my meaning clear. It had been raining. When the guy looked at me blankly, I simplified.”Why?”

Well that sucked. Once again, I’d researched and learned conflicting info. The company’s website said boats ran every half hour. The girl with pretty green eyes that matched her scarf at the information booth near the Hermitage said boats only ran at 12:30 and 1:30, which was great news as it was 11:54. (We’ve been sleeping late.)

Discouraged, we walked to the other pier in what felt like vain hope of finding another boat company that was still running. We could take the metro and a minbus there; I had printed instructions. But I had my heart set on a boat. (An enclosed boat.) I’d get all hot and sweaty again if I had to descend the endless metro escalator in my North Face jacket, fleece sweatshirt and scarf. Then, surely I’d have to ask 110 unsmiling Russians to point us toward the minibuses. We planned to take the minibus home, but I wanted to take the fancy boat there.

Lucky for me, there was another boat company running a hydrofoil, and it was not yet 12:30. However, pretty eyes was wrong; there was no 12:30 boat. We had to wait until 1:30 anyway.

Despite being enclosed and comfy, the boat ride was cold, so I put on my gloves and fuzzy hat. Arriving at Peterhof by boat was a treat.
We enjoyed the fresh, cold air and fall foliage as we disembarked. Peterhof’s famed 140+ fountains were in full glory and the gold and yellow palace sparkled as we ascended the steps and snapped photos. 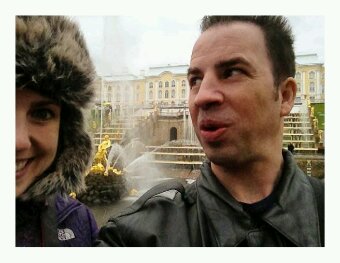 Then I felt a familiar faintness. Hunger. Today I had my mixed nuts with me, but since it was so cold, we wanted to sit and rest for a few inside a cafe. A nice souvenir lady pointed us back toward the pier. We passed ladies sweeping up fallen yellow leaves to the “Pectopah” (That’s Cyrillic for restaurant), which turned out to be swanky. More expensive than yesterday’s cafe near Peter and Paul. It wasn’t part of the palace of course, but in a separate standalone building with a patio where no one was sitting.

They offered bear and elk and rabbit. Rob really wanted a sandwich, but we didn’t see anything like that. We decided we’d be satisfied by a bread basket, fried potatoes and pumpkin soup. Still water and apple juice to drink. Ketchup and butter were extra. Our waiter did not appear amused by our meager order.

The food was excellent, but Rob’s apple juice and my pumpkin soup were each about $10.

When we got up to leave I notice a sad-looking Asian tourist, dining alone, camera atop the table, hunched over her bowl of soup. (Maybe I’m projecting. Rob didn’t think she looked sad.) 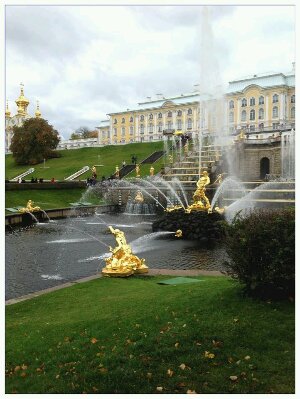 We continued our relaxing stroll, feeling happy to have escaped the grit of the big city for a while. Taking the hydrofoil was a clever move too, because we didn’t tire our feet out trying to get to the place.

As we strolled, we discovered a self-service Pectopah inside a palace-like building.

“Dammit! That’s where I wanted to eat! Why didn’t she point us in this direction?” A person-sized plastic ice cream cone stood outside a door. “And they have ice cream!”

Rob’s chief complaint about Russia is that it doesn’t seem as friendly as Italy with gelato on every corner.

On our way back, we did in fact have to ask a few Russians for directions. But eventually, it was an Asian couple I identified as fellow travelers by their giant camera, who told us where to catch the minibus. 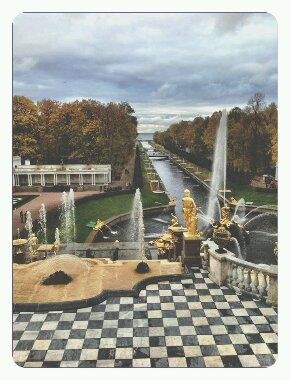