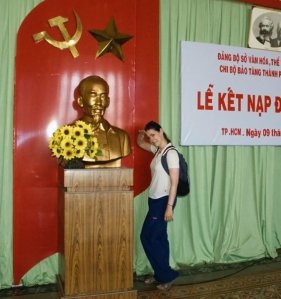 It was an entire year after India before I even felt like traveling. I also felt guilty about taking that much time off, so I didn’t take a single vacation day for an entire year. (I get plenty of holidays, and my schedule is pretty relaxed, so this wasn’t a huge hardship.)

When I heard that a friend of mine was going to be in Saigon for three months, at first I was insanely jealous. Then I bought a Rough Guide Southeast Asia for $5 at Half-Price Books and decided that I should go meet her there. Rob didn’t have much interest in Vietnam, so this was a perfect opportunity… when else would I say to myself, “Gee, I’d like to go to Vietnam alone”?

I also wanted to see Cambodia and Laos, but that proved too much for me to do in the two weeks I planned to be gone. So I settled for Cambodia, and joined a 10-day tour that started in Bangkok and ended in Saigon, where I stayed for a week with my friend.

I love to travel. I love riding on buses and tuk-tuks and boats and seeing a world so, for lack of another word, foreign to me. In southeast Asia, it’s rice paddies and thatched roofs, Buddhist shrines and motorbikes. 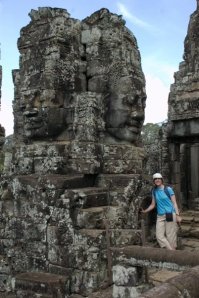 Cambodia was cool because of all the temples. I realized that temples weren’t the priority of my tour group when, after a daredevil sunset motorbike ride to Sam Mountain in Chau Doc, Vietnam, our motorbike drivers took us to a Buddhist temple with Las Vegas lights. One of my travel mates said, “What the heck are we doing here?”

This was the same guy who overslept and caused us to miss sunrise over Angkor Wat in Cambodia. 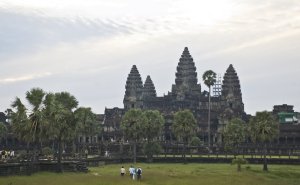 Even without the money shot, Angkor Wat was incredible. The must-see of Cambodia. Ancient Hindu-Buddhist temples, too hot and massive to visit all at once or on foot. Tour books advise you to take three days. We only had one, but we had an air-conditioned bus to take us to a temple or two, then back to the hotel for a rest and a shower before bringing us back to the temple complex. And a really amusing tour guide who told jokes like, “what is the difference between a woman and a pony? A woman wears her in a pony tail, but a pony doesn’t wear its hair in a woman tail.”

From the bus between cities in Cambodia, I saw long dirt pathways leading to narrow homes that were taller than they were wide. Freestanding ornate temple gates framed the entrance to the “driveways.” 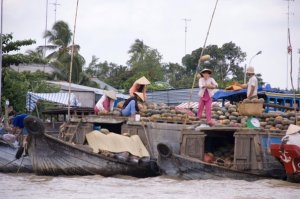 I thought the Mekong Delta would be more picturesque, like the backwaters of Kerala in India. Still, it was fun to see floating fish farms and floating markets and visit villages of Vietnamese Muslims and people who make coconut candy and rice paper (for tourists). 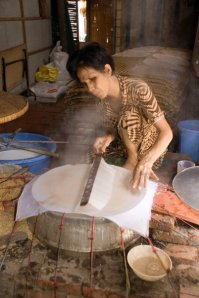 I spent the longest time in Saigon, because that’s where my friend was staying. It was a pleasant enough city, and I leisurely visited museums and pagodas. (Temples also were not the priority for my friend, who had to wait outside the Jade Emperor Pagoda, pictured below, because it gave her bad spiritual vibes.) 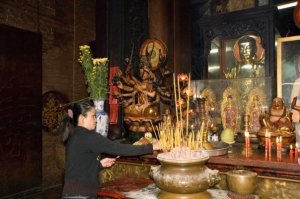 One of the reasons I prefer Bangkok to Saigon is that you have various shrines and temples in the middle of the streets in Bangkok. It is very obviously a Buddhist country. I didn’t see nearly as many monks in Vietnam, and had to go out of my way to see religious sights. (Except for the Notre Dame cathedral.) Guess we have the communists to blame for that. 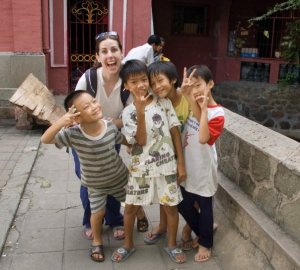 Worth noting, I had 99% success with bug spray…even a “natural” lemon eucalyptus spray (made by Cutter) that didn’t even have any Deet in it. I wore it like perfume, sprayed it on all the exposed skin every day, after every shower. I got one mosquito bite the whole time…and then ran out of the spray on my last day. When I got home, I discovered three bites on my legs and feet.

The trip was entirely without travel disasters and I enjoy reflecting on the experience and looking at my pictures. I especially appreciate the feedback my pictures get on Facebook.

But the best part of all was seeing Rob pull up to the curb at the airport, with Isis poking her nose out the open window to welcome me home.