Last weekend we took the dogs to Rob’s parents’ for a hot tub. (We were going to hot tub; the dogs were going to hang out on the deck.) After parking the car, I opened the back door and unhooked Mia from her tether, letting her hop out of the car off-leash. I actually said, “This is because I trust you.”

I was working on unhooking Leo when he started to bark.

I looked up and saw a deer racing down the street, with Mia hot on its tail. I closed the car door with Leo still inside as Rob chased after Mia.

She’ll be right back.

After about a minute, I got back in the car and drove down the street where I found Rob still calling her name. Mia had run out of his sight by the time he rounded the corner, probably into the woods, but who knew where the deer had gone? How far Mia would follow?

Rob went into the woods looking for her. I drove through 5 pm traffic to the other side of the woods with Leo, calling her name while Leo barked, in hopes that she would hear one of us and come running.

Mia is the kind of dog who sticks right with you. She is 90 percent reliable on leash. The other 10 percent is what happens when she sees another animal.

She knows this neighborhood. She’ll find her way back to Grandma’s house.

As five minutes stretched into an hour, my confidence wavered and I shivered from the cold coming through my open car windows. Would she try to make it back to our house? Should one of us wait there?

We posted her picture on a couple of community Facebook pages. I wrote something coherent like “Our dog Mia chased after a deer. She is a German shepherd and her name is Mia.”

One of the photos we posted on Facebook. Taken by Jolene Hanson for The Crossing Guide.

She had to be in those woods somewhere. Was she hurt? Had she fallen down a slope or into a creek?

The only thing we could do was go back into the woods to look for her with Leo. I left my car in the driveway with the tailgate open, in case Mia got back before we did. I pictured her hopping in to wait for us. I had my cell phone. If someone found her, they would call the number on her tag.

“Our dog does the same thing,” the woman said.

“We’re looking for our other dog. She looks like him, and is wearing a pink harness. She’s really friendly,” I added, as Leo continued to bark.

We reached a fork in the trail that Rob had already searched.

“What?” Rob called back.

And there Mia was, looking a little sheepish, soaking wet. Rob got to her first, so all I saw was her wagging tail behind him.

I think she did find herself in a bit of trouble, maybe ran too far into the woods and took a while getting back. Or maybe she had to climb back up a cliff. Either way, I’m pretty sure it was Leo’s Big Boy Bark that let her know where to find us.

The tightness in my chest released and that’s when tears almost came. I knew she’d be back.

For the A to Z Challenge, I’m using all positive language in my posts. Find out how I discovered the benefits of positive reinforcement training in my book, Bark and Lunge!

This is a belated entry into the Monday Mischief Blog Hop… because Mia’s behavior earned it! Thanks to Alfie’s Blog, Snoopy’s Dog Blog, and My Brown Newfies for hosting. 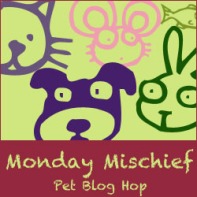