If you don’t follow SYTYCD (Canada or otherwise), surely you’d like to hear the latest on my dog.

She tears apart most toys, sometimes within minutes of putting her mouth on them. (The pink leopard ring is still intact, though, Aunt Louise. She loves it.) So we weren’t troubled by the dismemberment of Monkey Man. He was 2 years old, which is a long time in dog toy years.

This morning I was watching Isis on the petcam. She looked like she was licking her feet, but then I noticed something between her paws. The red smile was the giveaway. It was a sock monkey I made in 2004 from a kit given to me as a going away present three jobs ago.

That monkey, along with an E.T. doll from Quin and a teddy bear named Stanley that was given to me in 1996, had been perched on top of the couch since well before Isis adopted it as her bed.

Oh look, here’s a picture of Sock Monkey dangling provocatively over her head. Clearly, she used a lot of will power to resist him until now.

Somehow, she has always been able to tell the difference between toys she is meant to devour, and my fuzzy slippers, for example, or our beloved Hot Diggity Dogs. Oh sure, there’s been the odd confusion over a cat-shaped Halloween pillow and the feather-stuffed couch, but mostly.

Isn’t it strange, though, that she only messed with Sock Monkey after she’d murdered Monkey Man? Like, she recognizes that it’s a monkey and therefore she should be allowed to eat it.

I saw her tugging on the legs, but couldn’t tell how bad the damage was. Probably pretty extensive, since his construction was rather flimsy. I called in for reinforcements, and watched on the petcam as Rob’s mom moved the monkey, E.T. and Stanley out of harm’s way. 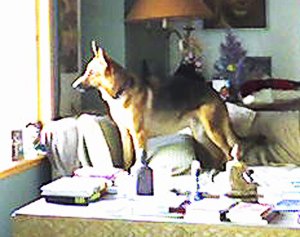 Here she is keeping an eye on the construction workers.